This is a big Patch Tuesday for some Windows users. Older systems such as Windows 7 and Server 2008 need both urgent and important updates to resolve publicly disclosed and exploited vulnerabilities. If you are running later versions of Windows 10, the situation is much improved, with recommendations for scheduled updates and comprehensive testing before deployment.

With 77 unique CVE’s addressed, two zero-days and six publicly disclosed vulnerabilities, some time and attention is definitely required for this Patch Tuesday update cycle. Older platforms will require immediate attention, while Remote Desktop Services (RDS) will need some testing and the latest features (sandbox) on Windows 10 1903 may require some additional unit testing.

That said, there is room for pure joy this month: no updates to Adobe Flash or Shockwave. Amazing, simply amazing. We have provided a graphical summary of this month’s Patch Tuesday release cycle here. 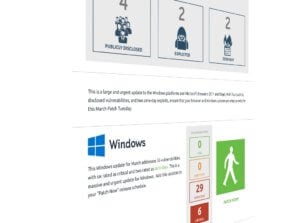 If ever there was a time to pay attention to the “Known Issues” section in Microsoft’s Patch Tuesday release notes, it may be this month’s release. We know that there was a major issue reported against Microsoft’s cryptographic library (SymCrypt) in early March, with a planned patch scheduled for June – which was subsequently delayed to July due to testing issues. It’s generally not a good sign when you see the phrase, “We are investigating reports that a small number of devices may start-up to a black screen during the first logon after installing updates.” in the middle of release notes.

In addition, we are seeing issues with updates to Windows 10 1903 and the new sandbox functionality. Finally, if you are heavily reliant on Microsoft Remote Desktop Services (RDS), then you will need to take a look at these latest updates and how they apply to Windows 10 desktop platforms. Here is a brief summary of some of the issues raised this month with the July Patch Tuesday release cycle:

We have not found any major revisions that require attention for this update cycle.

With this month’s update to Microsoft’s two browsers (IE and Edge) Microsoft has attempted to resolve eight critical issues, and nine reported issues all leading to potential remote code execution scenarios. These combined vulnerabilities can be grouped into the following categories:

Unfortunately, Microsoft has reported that these vulnerabilities are likely to be exploited on all platforms, they could lead to code execution with  full user or admin privileges and may only require a visit to a specially crafted web page to exploit. This makes these updates both urgent and important. Add these browser updates to your “Patch Now” release cycle.

This is another big month for the Windows platform, with two reported critical issues and 48 issues rated as important by Microsoft. There are two zero-day vulnerabilities reported this month, both relating to Windows 7 and Server 2008 platforms. If you are running the latest version of Windows 10 (1903) then you only have to worry about two issues:

Both of these security issues are a real concern. However, maybe it is time to move off of the Windows 7 platform and on to a modern desktop such as Windows 10. It’s not quite the moral imperative of moving from Windows XP, but these issues are great “monthly reminders” to at least start the planning process for a desktop migration.

If you have moved, and if you are on the latest Windows 10 build (1903) then your build team needs to spend some time on the new sandbox functionality, as there were reported testing issues this month. And, please test your Remote Desktop Services (RDS) implementation. I am not sure that there is a direct mapping to an application specific issue, but it may be time to run RDS through your basic unit tests before a general deployment of the Windows 10 updates. If you are using Windows 7 and 8, add these updates to your “Patch Now” release schedule. If you are using Windows 10, add these updates to your standard deployment schedule of patches.

Microsoft has released seven updates for Microsoft, none rated as critical. There are three vulnerabilities addressed for Microsoft Exchange, all rated as important by Microsoft as they could lead to a spoofing attack scenario, although difficult to exploit:

Add these updates to your standard office patch schedule.

Microsoft has really broadened the scope of what can now be included in Patch Tuesday related updates. We are seeing updates to Docker, Azure DevOps, .NET core libraries and most importantly to the Chakra scripting engine.

Some of the more important updates (also rated as critical by Microsoft) include:

We advise adding the .NET changes to a scheduled development update. The Chakra scripting engine updates need to be added to your “Patch Now” release schedule.

There are no updates for Adobe products this month from Microsoft. Yes, it’s true.

Maybe my advice was heeded, and everyone just stopped using Flash. That said, there were two updates to Adobe products for July including: